Thursday 7/10/10 Color Spit Solo One participant spitted plumes of food dye for eight hours near the windows of the gallery. The gallery was otherwise empty except for a large trolley packed with materials for use in future AFA performances.

Friday 8/10/10 Red White Blue Groups of volunteers were painted in one of three colors. They arranged themselves on pedestals of the corresponding color (those painted red on the red pedestal and so on). Every few minutes the groups were asked to change their poses. As the performers grew physically more comfortable with each other and drew inspiration from one another’s poses, their poses changed accordingly. Glitter (red, silver, blue) was added intermittently to highlight shapes and detail.

Saturday 9/10/10 Cut Out Male A male participant’s entire body was documented, and a selection of images was printed to size in advance of the performance. During the performance the printed images were cut into fragments and applied directly to the performers body.

Tuesday 12/10/10 Mylar Duet Aided by gallery visitors and the artist, two participants covered themselves in cut pieces of Mylar.

Wednesday 13/10/10 (Work Day) The space was cleaned and organized. Performance debris was integrated. Videos and images were edited.

Thursday 14/10/10 Narrative One participant, dressed in formal gear, lay on a mattress on top of a pedestal. Throughout the day performative interventions took place on and around his body, while a short stop-motion video was filmed.

Gallery visitors became involved in the performance throughout the day. One visitor joined the performance. He was provided a new set of clothes at the end of the day.

Friday 15/10/10 Teens With Masks - Foil Two teenagers made aluminum foil masks for themselves to conceal their identities. Wearing masks, each assumed a pose on a pedestal which they held for the duration of the performance. Visitors to the gallery were invited to add (but not subtract) Aluminum Foil to their bodies.

Saturday 16/10/10 Choreography The performance started with a group of 6 volunteers working on a piece of choreography that was filmed. Later glitter, flour, body paint and other materials were added. At one point over 100 gallery visitors joined the performance. Tuesday 19/10/10 (Work Day) The space was cleaned and organized. Performance debris was integrated. Videos and images were edited.

Thursday 21/10/10 Glitter Two participants, baby oil, and 100 pounds of holographic glitter were the materials for this performance.

Friday 22/10/10 Cut Out Female A female participant’s entire body was photographed and measured, and a selection of images was printed to size in advance of the performance. During the performance the printed images were cut up into fragments and applied directly to the performers body.

Saturday 23/10/10 Teens with Masks – Q&A Six teenagers, sourced from Brooklyn’s youth drug prevention programs, each purchased outfits to assume a role or persona. During the performance they wore the outfits, which they further embellished with aluminum foil, tape and other materials. Simultaneously, they also wrote topics of conversation on scraps of paper and placed them in a box. When visitors entered the gallery, a question was randomly selected and discussed in public. Visitors were encouraged to add questions and topics of conversation to the box. The teenagers led an 8-hour public conversation on a wide range of topics with a large group of people.

Tuesday 26/10/10 Pure Sublimation A group of participants worked with colored paper and body paint to make a stop-motion video.

Wednesday 27/10/10 Color Spit Duet Two participants, one male and one female, spat food dye in choreographed plumes at each other. Footage was combined to create a short video.

Thursday 28/10/10 Phosphorescent Group For this performance the gallery was darkened while a group of participants and props were painted with phosphorescent paint. The paint was charged with light, the light was turned off, and the glowing performers then held poses in the dark until the glow of the phosphorescence had weakened. The action was photographed and filmed.

Friday 29/10/10 Mondrian Miek (Ian) One participant was painted and repainted with body paint while sitting on a pedestal. Most of his clothes were cut off and his hair shaved.

Saturday 30/10/10 Color spit Group 6 participants were scheduled, but 12 showed up, to spit food dye in choreographed bursts inside an open Plexiglas “arena”. Resolving the logistical issues of using twice the number of performers and twice the amount of materials became part of the performance.

Tuesday 02/11/10 (Work Day) The space was cleaned and organized. Performance debris was integrated. Videos and images were edited.

Wednesday 03/11/10 Phosphorescent Duet The gallery was darkened and a small black box space was added. The performance included two participants and phosphorescent paint.

Thursday 04/11/10 Untitled (knitting) A group of 6 participants each knit on a pre-knit sheet of circular yarn. Each circular sheet was connected to two neighboring sheets, leading to an entirely interconnected structure. In order to gain a stitch a performer had to unravel fabric from a neighbor. Gains and losses became visible through changes of color in the performers’ sheets.

Friday 05/11/10 Cut Out Male and Female One male and one female participant’s entire body was photographed, and a selection of images was printed to size in advance of the performance. During the performance the printed images were cut into fragments and applied directly to the performers bodies.

Saturday 06/11/10 Summary On this last day a group of participants worked entirely on their own, building on the ideas and materials from the exhibition’s previous performances. The artist was not present and there are no photographs of this performance. 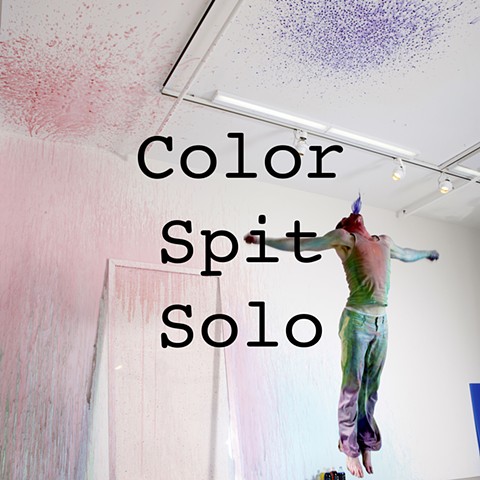 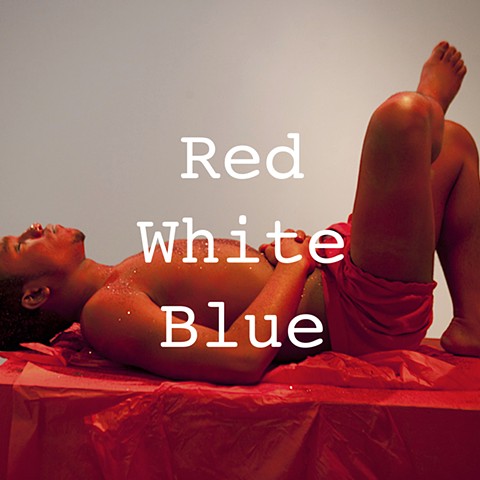 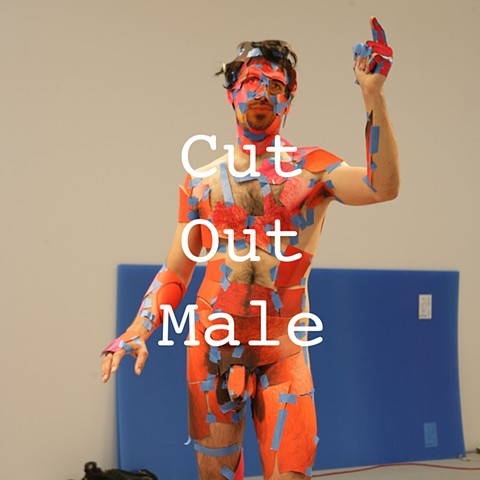 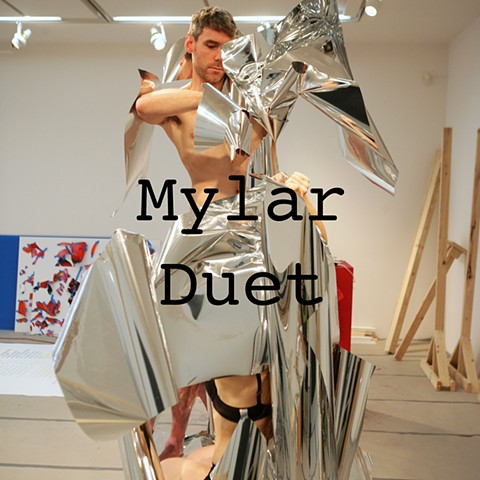 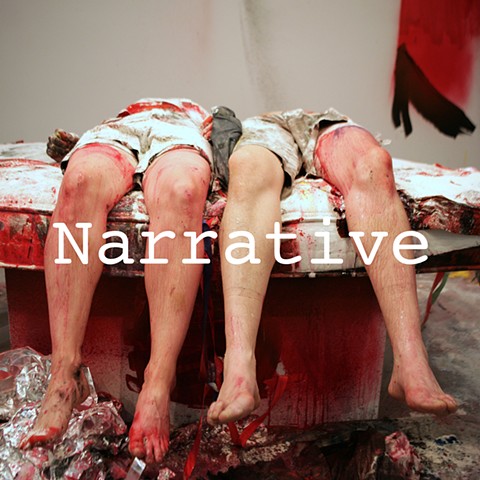 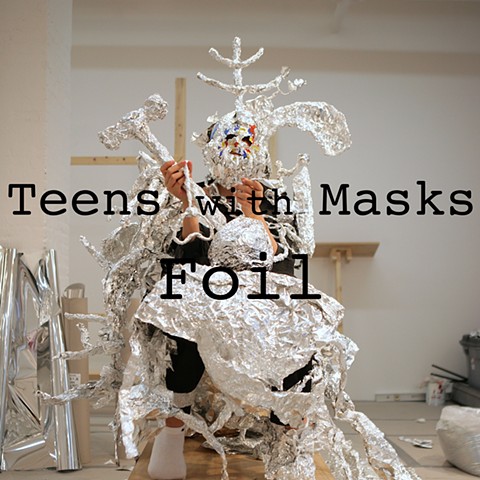 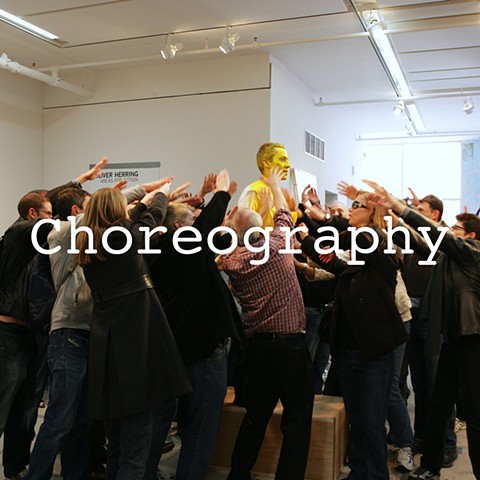 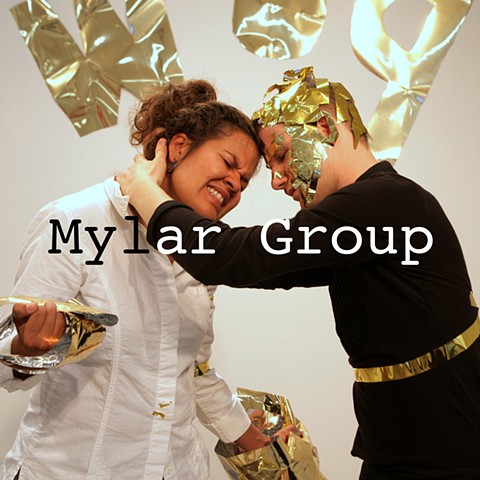 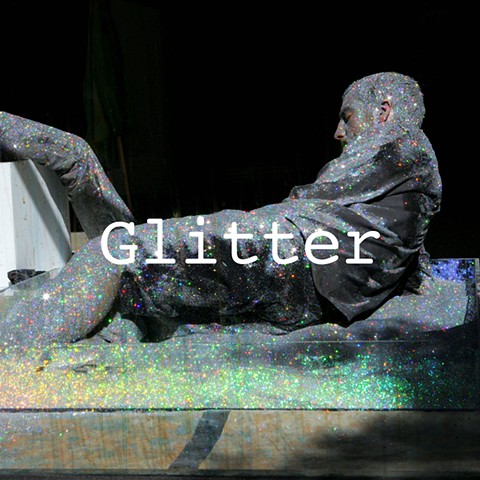 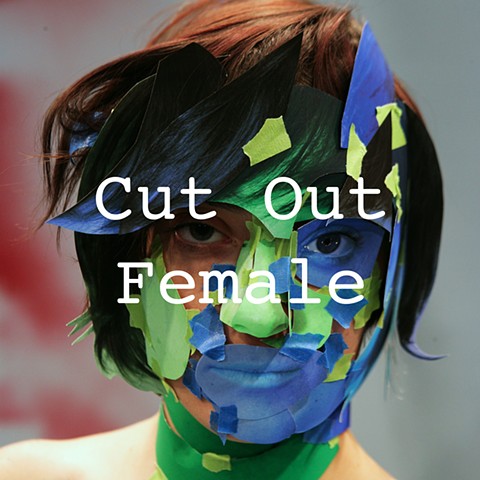 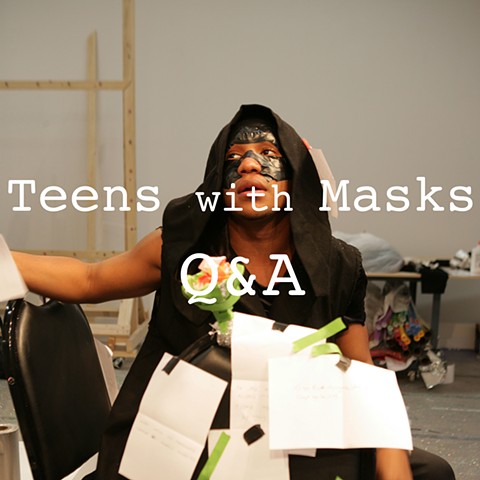 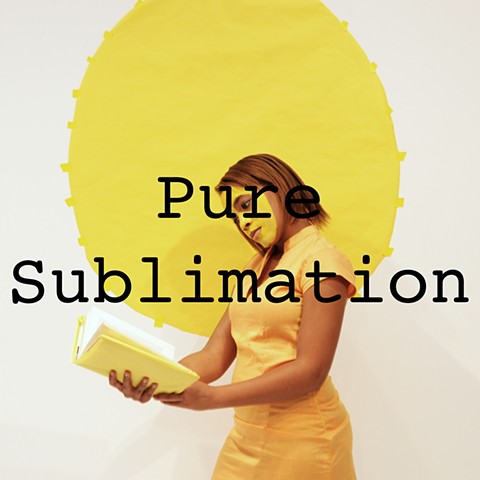 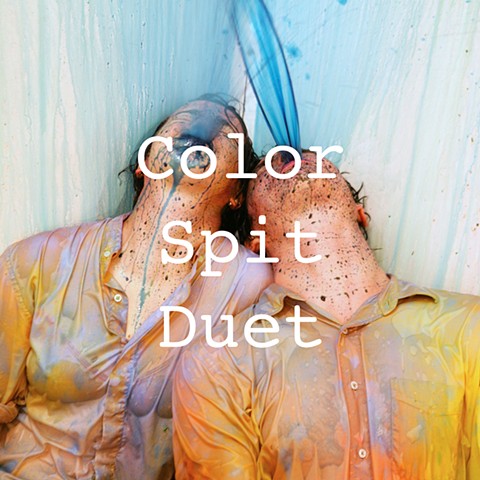 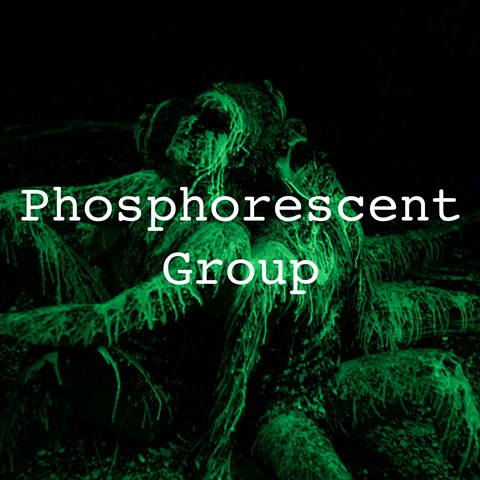 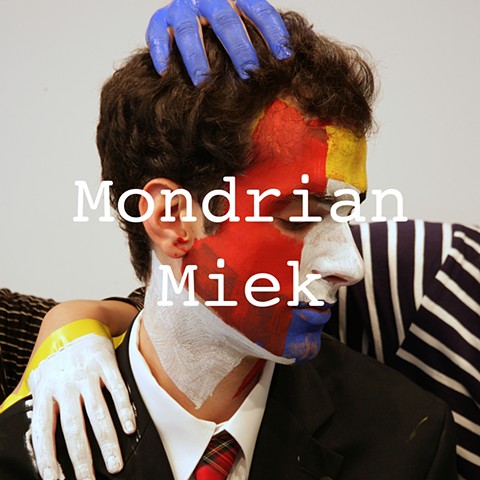 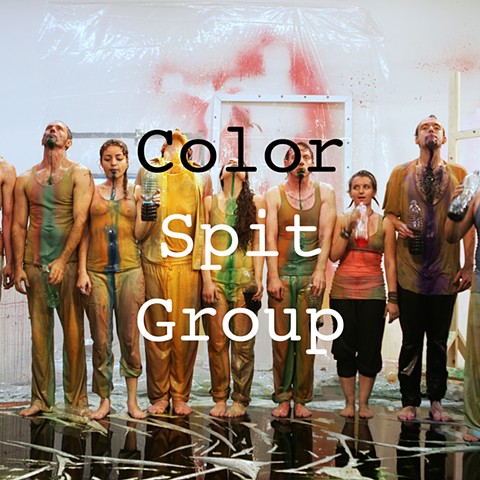 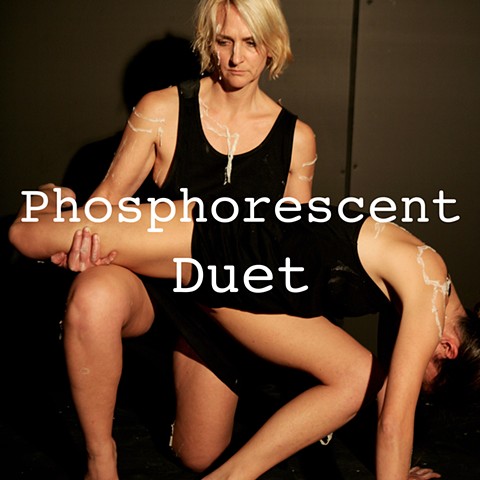 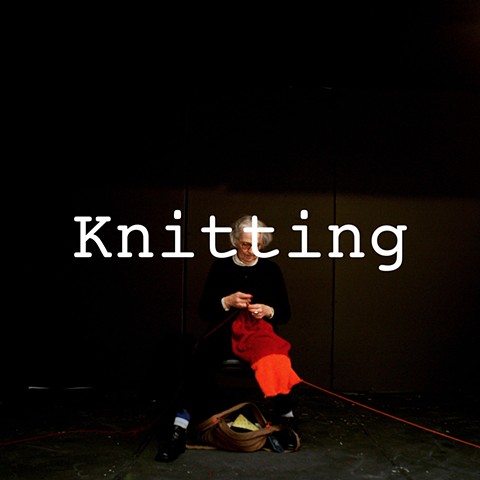 Knitting
Cut Out: Male and Female 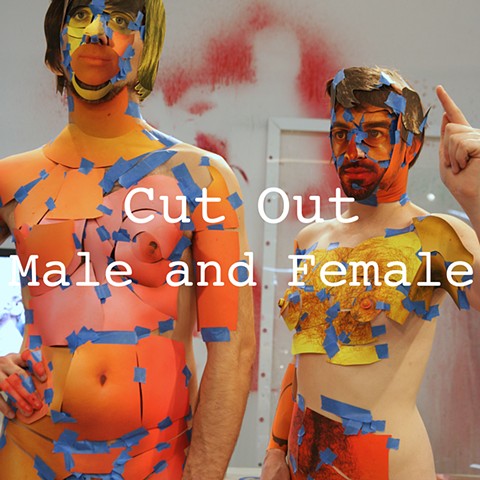 Cut Out: Male and Female