I was invited for two weeks to the He Xiangning Art Museum, Shenzhen for the exhibition The Logic of Paper: American Works on Paper. At the museum I installed an exhibition of images and videos of the barely one-month old Areas for Action – New York. I furthermore organized and performed two performances from Areas of Action for the opening weekend. Documentation of the performances was later added to the exhibition. Performance debris, such as the pedestals, paint smudges and painted underwear were left in the space to contextualize the photographs and videos.

25/12/10 AFA-Shenzhen: Photo Cut Out (Male and Female) I photographed one male and one female volunteer in their underwear, in a pose of their choosing, and printed the images to size in advance of the performance. During the performance I cut the images into fragments and applied them directly to their bodies.

26/12/10 AFA-Shenzhen: Red White Yellow Groups of people wearing only underwear were each painted in either red, white, or yellow body paint. Painted, they climbed on the pedestals of the corresponding color (persons painted red on a red pedestal and so on). Every few minutes I ask one of the groups to change their pose. As the performers grew physically more comfortable with each other and drew inspiration from one another’s poses, their poses changed accordingly. Intermittently, I added accents of glitter to highlight shapes and detail.

Some visitors to the museum spontaneously joined in, stripping down to their underwear, painted their bodies, and joined one of the groups on a pedestal.

Photo Cut Out (Male and Female) 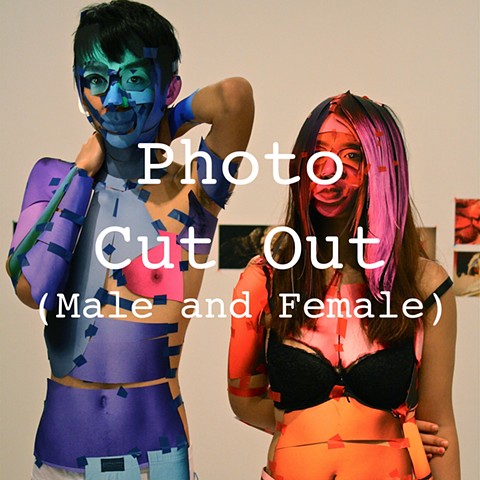 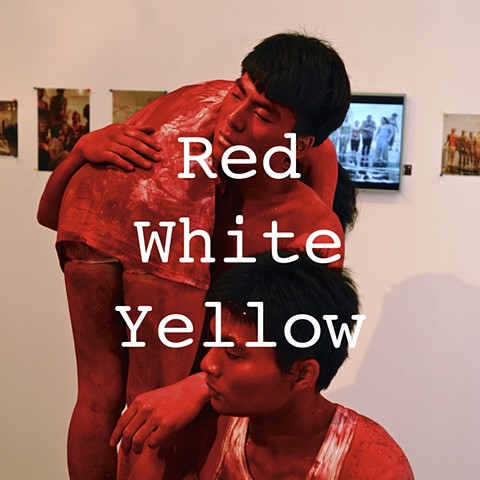